The Excel-Soccer Basic is available as a free version. Additionally to the management of the matches for leagues with up to 20 teams, the Excel Soccer Basic includes a prediction game with up to 32 participants. Various settings allow you to fine-tune the application.

In the following some instructions how to use the Excel-Soccer Basic and how the software works. The screenshots are showing the preconfigured league manager for the german Bundesliga. Please note, that the screenshots may be seen as examples and can – in case no changes occured to the features shown in the screenshot – contain dates and version numbers from previous versions. The download section offers more preconfigured versions for the Excel-Soccer, such as for the Premier League, the french Ligue 1 or the spanish league. Click on the headings to view the content of the corresponding categories.

The Excel-Soccer assumes that the license terms has been accepted. After opening the Excel file, you can find the license terms by clicking on the icon at the left side displaying a copyright symbol. The licence terms are also available on this website on the License page.

The Excel-Soccer has been tested in Microsoft Excel 2010 and Excel 2013 for the languages German, English and French. As far as I know, the Excel file should alos work in Excel 2007. Older versions of Excel are not supported – and will also not be supported in the future. Additionally, no tests were done with other spreadsheet applications. 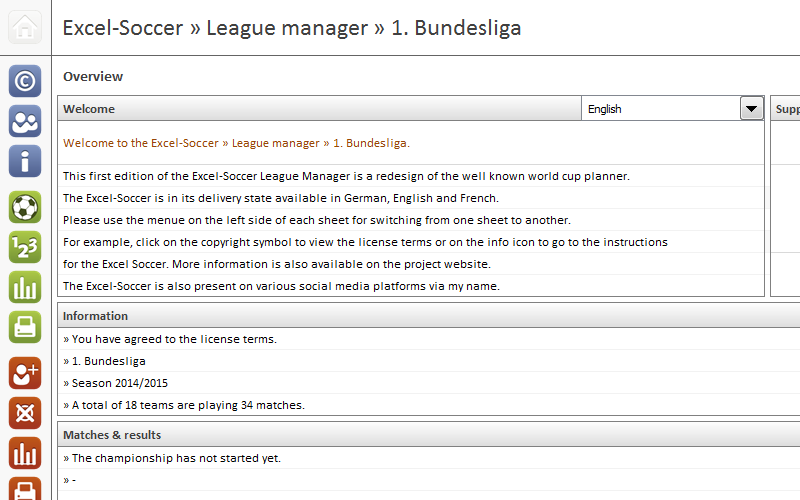 The Excel Soccer tries as much as possible to recognize erroneous data and to point out inconsistencies. In such cases, a message appears in the header of the current sheet. For missing or erroneous information on unlocked fields, such as for the match results or for the prediction game, an exclamation point or a question mark is shown next to the field. An exclamation mark is given a higher priority than a question mark.

In order not to jeopardize the integrity of the formulas used in the Excel-Soccer, avoid copying and pasting cells. Cut und paste operations can also lead to loss of functionality. If you want to insert content from other cells or another workbook, be sure that only the contents are copied and not the formatting.

The Excel-Soccer uses the system date and time to calculate whether a match has occurred and whether the match results may are required. The Excel-Soccer also takes into account the playing time, the half-time and optionally an average for an additional time.

These values are defined in the settings for the Excel-Soccer. In its delivery state, the playing time is set to 90 minutes, the half-time to 15 minutes and the additional time to 0 minutes. The system date and time is also used to calculate the current matchday. If the present day is within the interval to the dates of the matchdays, the Excel-Soccer sets the matchday appropriately.

The Excel-Soccer offers a test mode for testing purposes. This mode turns off the automatic calculations for the matchdays and uses the date and time values defined by the user. The option can be found in the settings for the Excel-Soccer. A date and a time are required to be entered in this mode.

In case your version of the Excel-Soccer does not include the teams and/or matches, you will need to enter them manually. Please note, that you should firstly enter the teams as this data is used in selection lists for entering the matches. You should specify a date for each match. The time is optional. 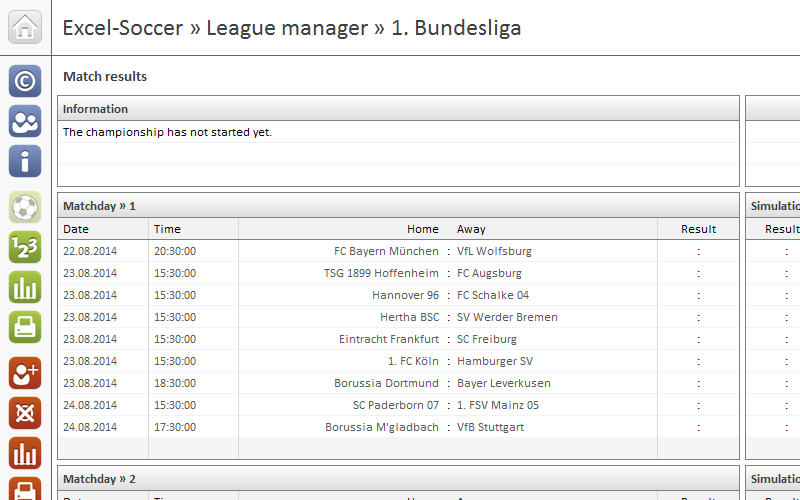 After a match has been played, you may also enter the match result manually. The Excel-Soccer offers you up to four simulations for the match results. These simulations are independent each one from another and will only taken into account for future matches. Therefore, there is no need to manually delete the data for simulated results from the past.

The view for the tables/rankings of the teams includes a general table and tables for the home and away matches. You can choose the matchday in a selection list and, for example, select previous matchdays and view the corresponding tables. Simulated match results will be taken into account in future matches. You can also compare the rankings of the teams between two matchdays. The second comparison is automatically calculated and compares the rankings to the previous season or the first round, depending from the round in which you are. 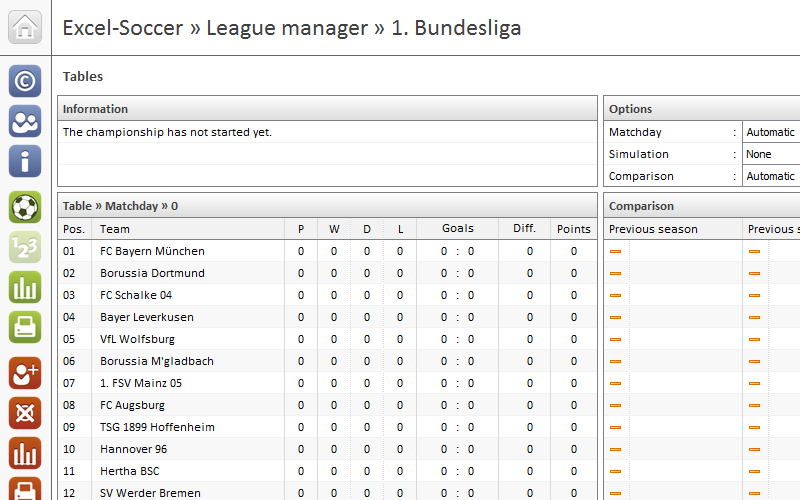 The calculation for the rankings uses the following rules:

This version of the Excel-Soccer does not take into account a direct comparison of the teams. This also means that, for example, at the beginning of a season where some matchs results may be equal, the rankings can differ from the official table. 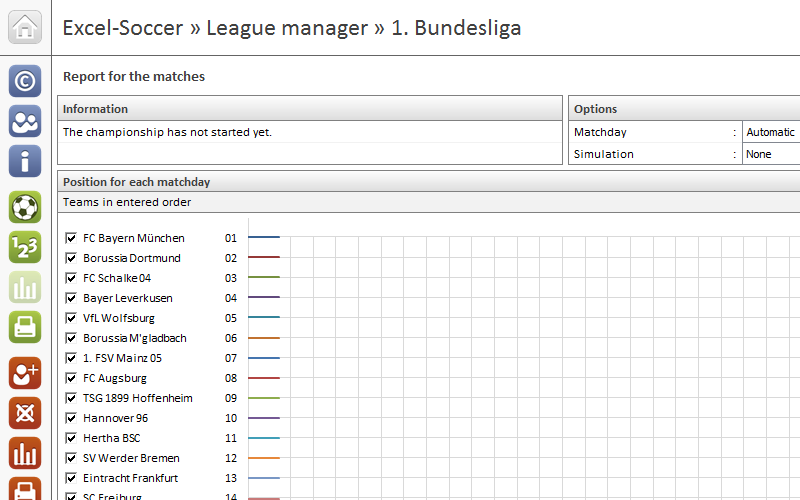 The report for the matches includes a graphical visualization of the positions of the teams over the time as well as a chart showing the goals scored per team. You can either select the matchday manually or keep the automatic calculation for the current matchday. The order of the teams in the chart is corresponding to the order entered in the settings for the Excel-Soccer. Teams can be selected or deselected in the chart. And, simulations are optionally taken into account.

This version of the Excel-Soccer allows up to 32 people to participate in the prediction game. Please avoid gaps when entering the participants to prediction game. You can specify in the settings for the Excel-Soccer whether only the first name, the last name or both fields are mandatory. The abbreviation is normally automatically calculated and you can define in the settings whether 2 or 4 characters are used for the abbreviation. It is also possible to override the calculated abbreviation by entering a user defined value in the corresponding column. This is intended to avoid undesirable results such as ‘Susi Sonntag’ which leads to unwanted combinations, especially in Germany.

The predictions by the participants should be entered to the prediction sheet. Incorrect information is as far as possible highlighted. If a match took place, the predictions are slightly grayed out, the points calculated, displayed and highlighted by an icon, according to the settings made. Since macros are not used in the Excel-Soccer Basic, filled fields for matches that had taken place are not automatically locked. 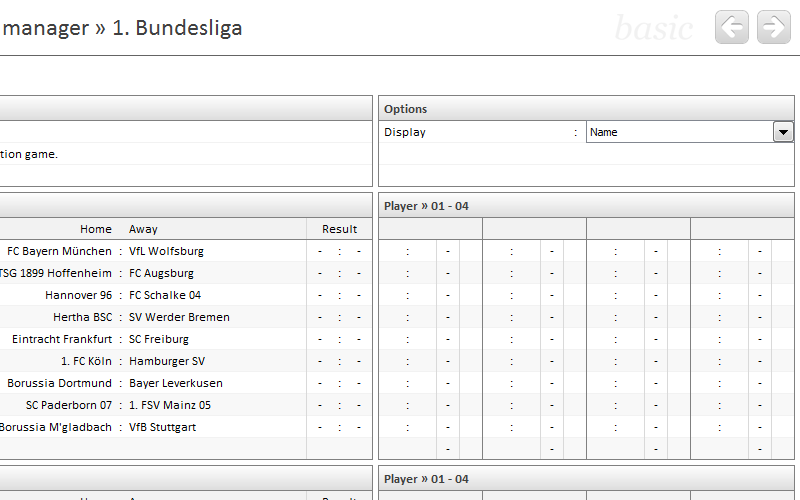 The prediction game provides three possibilities for giving points to the participants:

The report for the prediction game includes a graphical visualization of the rankings for the participants. You can select the matchday or use the automatic calculation for the current matchday. 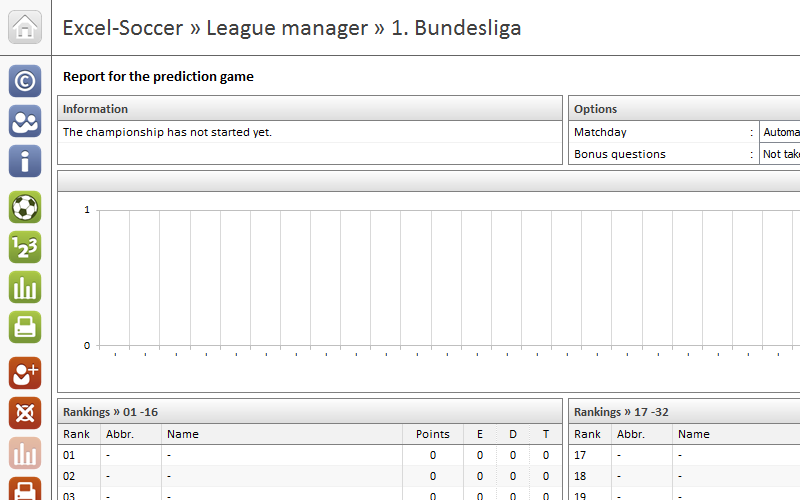 The Excel-Soccer uses the following rules for calculating the positions for the participants to the prediction game:

The settings for the Excel-Soccer allow to setup various options, for example for the language, for the teams, for the points given to the prediction game particpants and much more. Depending on the version you have downloaded, you should verify and setup these settings before using the application. 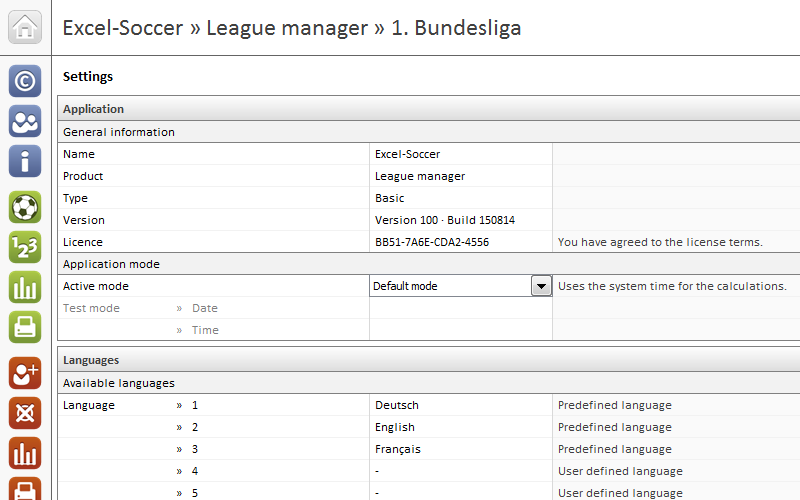 The sheet for the translations includes all texts and identifiers needed by the Excel-Soccer in different languages. However some cells, such as the cells for the copyright and license, can not be overwritten. Translations to user defined languages should be made in this sheet. 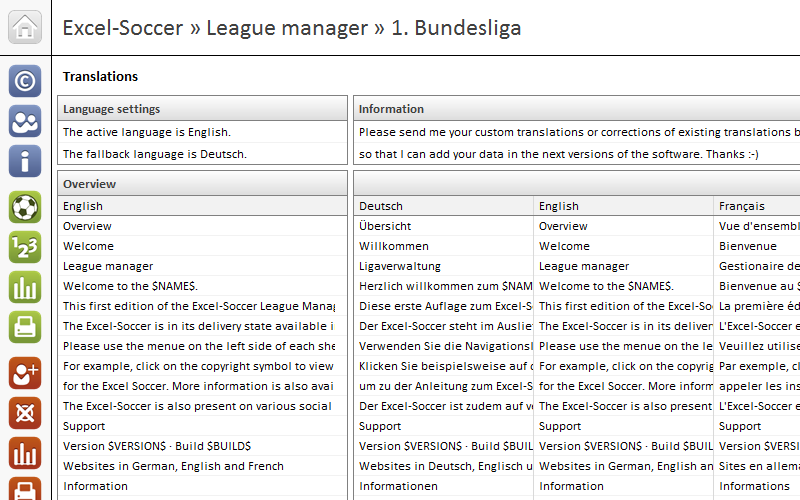 If you translate the Excel-Soccer to another language or correct an existing translation, please send me your work by e-mail to translation (at) excel-soccer (dot) de so that I can add your data to future releases of the Excel-Soccer.